CELPIP Test scores are available online through your CELPIP Account in 4-5 calendar days after your test date.

CELPIP Test scores are available online through your CELPIP Account.

Test takers can access their CELPIP Test scores online through their CELPIP Account in 4-5 calendar days after their test date.

A hardcopy Official Score Report can be ordered through your CELPIP Account for an extra charge. See below for more details.

Priority shipping for the hardcopy Official Score Report is available at an additional fee. Prices may vary depending on your address. See below for more details.

You can apply for a re-evaluation of some or all components of your CELPIP-General Test within six months of the test date. See below for more details.

Below is a chart of each CELPIP level and its corresponding description. Since the CELPIP test scores have been calibrated against the Canadian Language Benchmark (CLB) levels, we have included the CLB level equivalencies for your information.

Approximate Scores and CELPIP Levels for the Listening Test

DISCLAIMER: This example chart shows how scores in the Listening Test approximately correspond to CELPIP Levels. Since questions may have different levels of difficulty and may therefore be equated differently, the raw score required for a certain level may vary slightly from one test to another.

Approximate Scores and CELPIP Levels for the Reading Test

DISCLAIMER: This example chart shows how scores in the Reading Test approximately correspond to CELPIP Levels. Since questions may have different levels of difficulty and may therefore be equated differently, the raw score required for a certain level may vary slightly from one test to another.

The writing and speaking components of the CELPIP-General Test are scored by qualified raters trained to apply consistent criteria to assess test taker performances based on standard scoring rubrics. Raters receive ongoing training and regular monitoring. Paragon uses rater agreement statistics to determine the quality of ratings; for a given test taker, a rater agrees with the other raters of this test taker if their rating is sufficiently close to that of the other raters (i.e., consensus).

Raters receive ongoing training to ensure that the scoring criteria are consistently and systematically applied by all raters, and to minimize potential bias introduced by human judgment.

All raters attend an initial training program to guide them through Paragon’s rating approach. After completing a training manual, exercises, and rating samples, trainees engage in a certification process during which they rate 3-6 certification sets. In order to certify, trainees must achieve a minimum 80% agreement with the official score assigned to each performance in at least three consecutive sets. Only certified raters can start operational rating.

To maintain a shared perspective on relevant rating principles and criteria, all operational raters receive ongoing in-service training and monitoring, including:

Rater performance analysis is conducted monthly to monitor the reliability of the rater pool and to identify raters who have unsatisfactory rater agreement. Underperforming raters receive personalized feedback on rating samples that demonstrate a significant discrepancy between their ratings and benchmark ratings Additional samples are provided upon request by a rater. Once identified as underperforming, a rater must demonstrate improvement within 8 weeks. If an underperforming rater does not demonstrate an improvement to meet Paragon’s rating standards within that period, Paragon may terminate their rating contract.

All tests are randomly assigned to raters by an online system. Test taker anonymity is maintained at all times. Each test taker’s performance, i.e. a test taker’s responses to all tasks in the component, is assessed by multiple raters. Each CELPIP speaking performance is rated by a minimum of three speaking raters, and each CELPIP writing performance is rated by a minimum of four writing raters. Raters work independently of one another, and have no knowledge of the ratings assigned by other raters.

The rating dimensions that have been developed for the writing and speaking component are listed above on this page in the Performance Standards section:

The Speaking and Writing component scores are derived from the dimensional ratings assigned by the raters. These scores are then transformed into a CELPIP level. The transformation rules have been established by English language experts who participated in a standard setting exercise. Standard setting is an extensive, research-based process. Language experts work with testing professionals to identify what language learners need to be able to do at each performance level, such as CLB 8. The experts then analyze the test in detail and determine what level of performance a test taker needs to demonstrate for each CELPIP level. This process has established a defensible link between each Speaking and Writing component score and its corresponding CELPIP level.

How and When Do I Get My CELPIP Scores?

You can access your CELPIP Test scores online through your CELPIP Account in 4-5 calendar days after your test date. Please note that business days do not include weekends or holidays.

Your CELPIP Test scores can be accessed and viewed online in your CELPIP Account for a period of 2 years, from your test date.

It's been more than 5 calendar days since my test, and my scores have not been posted online. What should I do?

In rare instances, your CELPIP scores may be delayed. This could be for one of the following reasons:

If it’s been more than 5 calendar days since your test and you have not received an email from the CELPIP Office, please feel free to contact us directly for more information.

If it’s been 5 calendar days or less since your test, your scores should be posted soon! You will receive an email confirmation once your scores are available online.

Does Everyone Take The Same Test?

For security reasons, there are many different test forms (versions of the test). Different test forms are administered to different test takers even if they take the test at the same time. Each test form will have some unique questions and possibly some questions that are shared with other forms. Paragon administers multiple forms to minimize the chance of somebody having access to the questions before their testing time, thereby gaining an unfair or undeserved score on the test.

Are There Unscored Questions on the Test?

New items are constantly being written. Before they can be used as scored items, they are pre-tested to ensure that they are equivalent in quality to existing items. Paragon includes some new items in every test. These items look the same as the scored items but they are not used to calculate your score. Paragon does not tell the test taker which questions will be unscored because it is important that test takers try their best for every item. This ensures that the data collected on the new items can be used to evaluate their quality. Only questions that have performed well will be used as scored items in the future.

Is One Test Form Easier Than Another?

While each test form contains different questions, each test form is constructed following explicit guidelines regarding content and difficulty. Paragon’s pre-testing and form creation procedures ensure that the different forms have approximately the same difficulty. However, the items are not identical from administration to administration, and this means that it is possible for there to be small differences in difficulty. It would be unfair to test takers if final test scores did not correct for these small differences. The process of score equating removes even this slight variation.

What is Score Equating?

Score equating is the process of correcting final scores for slight variations in difficulty between test forms. For example, if one test taker correctly answers 30 questions on a relatively easy form and another test taker answers 30 questions on a more difficult form, equating will correct for the disparity in form difficulty. It is of utmost importance that the score reported for either of the test forms is comparable. We need to make sure that the final score reflects your underlying language proficiency and is not dependent on the difficulty of the questions you or someone else received.

The goal of any test is to provide a fair and accurate assessment of each test taker, regardless of the specific questions presented during the test. Though CELPIP tests are assembled following guidelines for content and difficulty, it is still possible for test forms to vary slightly in difficulty. Since a raw score is merely the sum of the questions that a test taker has correctly responded to, it cannot account for these slight variations in difficulty. Consequently, a raw score of 30 will not have the same meaning across different forms of a test. This means that different test takers’ raw scores could be hard to interpret and compare.

How Are CELPIP Levels Determined?

After the Reading and Listening scaled scores have been determined, they are transformed into a CELPIP level. The transformation rules were established by English language experts who participated in a standard setting exercise. Standard setting is an extensive, research-based process. Language experts work with testing professionals to identify what language learners need to be able to do at each performance level, such as CLB 8. The experts then analyze the test in detail and determine what level of performance a test taker needs to demonstrate for each CELPIP level. This process has established a defensible link between each Reading and Listening scaled score and its corresponding CELPIP level.

How Reliable are the CELPIP Reading and Listening Scores? 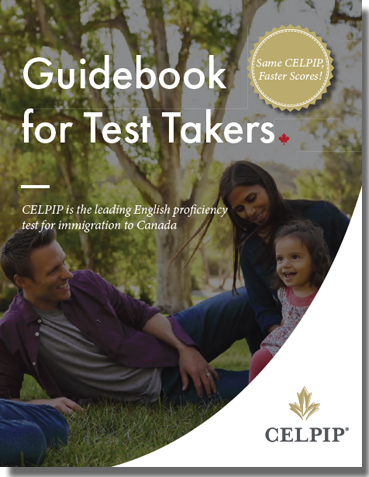